Departure day from Notch Point we were up early, commencing our planned days driving prior to 7 am. We blame Taylor and Ernie for our early rise with a need to train our body clocks for waking around first light. These two perpetrators were meant to have been our Canada travel companions for 2020, with all four of us inhabiting their caravan, (Aussie,) or as it is called in Canadian a (trailer) and tow tug. They were going to show us around Canada with plans to visit the Yukon, Vancouver Island, Yellowknife, Nova Scotia to mention a few with many more locations on our radar. The above two architects of this planned trip were also early risers and we have been conscious when waking around dawn, not to roll over and go back to sleep.

We had planned for several days of drive time to get ourselves into the nearby region of Brisbane for planned caravan maintenance. Along the way we had factored in a day or two at a couple of nice sounding locations for further exploration if we required.

At about the 55-kilometre mark was our first location of interest to explore, the town of Clairview and we had decided to make this our breakfast stop. We didn’t feel any urge of interest around Clairview, though we did like their public amenities block, artwork.

Another 42-kilometres down the road was a camp location of St Lawrence. We walked to the nearby wetlands where we saw swans, ducks and a couple of Brolgas in the distance. It was still early and we decided to continue driving as we had previously explored St Lawrence offerings. 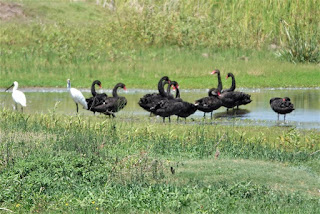 Our bodies were saying ‘no more,’ and after another 186 kilometres we parked up, utilizing a free camp location in the middle of the 78,000 populated town of Rockhampton. We were in a beautiful parkland setting where council permitted 2 nights stay in one of the carparks of Kershaw Gardens. There was plenty of green grass with birds enjoying the many trees. Through the parklands there were formed walking paths, a waterfall and another great playground. We walked across the road to a large shopping centre and restocked our pantry and fridge. It was a great location in the middle of a large town.

The downfall to staying in the middle of a large town was the constant nearby traffic noise. We woke the following morning at 5.30 am and thankyou to our constant thoughts for that Canadian couple, Taylor and Ernie we immediately rose, attending a nearby laundromat, catching up on our last 3 weeks of clothes washing.

We topped up our tow tugs fuel requirements and obtained some much-needed loo paper we had forgotten to replenish the previous day. Around 8 am we were mobile to our next targeted location for another free camp at Calliope about 100 kilometres down the road with our first chore to hang out our washing. 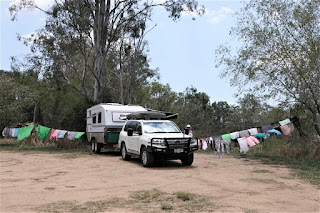 It was about another 140 kilometres down the road to our next target location for the much publicized 1770 & Agnes Water towns. This was a location not previously visited by us and we thought it to be an opportune time to assess ourselves, all the hype for this location. The local population at any given time would consist of 99 tourists to 1 local, so we had been told. Yes, it did look like a nice locality but due to its crowded environment with exorbitant fees it didn’t entice us to stay for an extended period. The beach side caravan park looked like everyone had been packed in like a can of sardines. 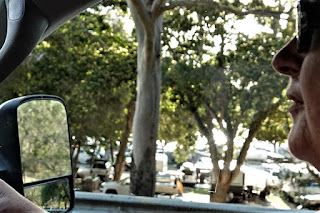 We chose to stay a night at a quiet farm stay type location just out of town and proceeded to explore the area without our caravan in tow. There was a National Park located six kilometres out of town that sounded nice, with a further ten kilometres to a campground in the National Park with some good reviews. Though it was recommended to enter from the other end with a caravan in tow, = about a 60-kilometre drive from our camp location. We thought the ten-kilometre drive shouldn’t take much of our time with us in a good 4wd vehicle.

About 50-metres in we stopped in soft sand, bogged. Next low range was engaged and we managed to move to a spot off the track where Steve deflated our tyres. It was ten slipping and sliding kilometres down the road to our destination of Wreck Rock campground. It was a nice-looking forested campground, unfortunately with many low tree limbs and a thick overhead canopy all unsuitable for our caravan. 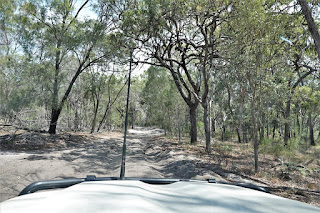 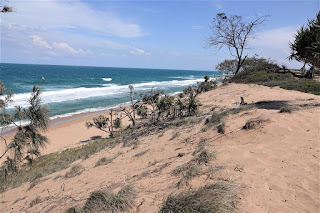 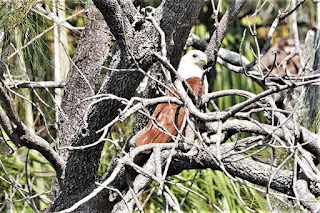 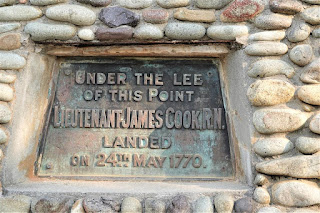 And it was a 60-kilometre drive back to our camp.

We did, enjoy the Paperbark Tea Tree walk near Agnes Water. There were a couple of other touristy locales we could have viewed but the thought of the associated pushy sales tactics annulled those thoughts. For us this area seemed overpriced for what it had to offer, compared to many other locations we had experienced. 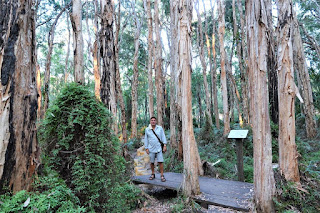 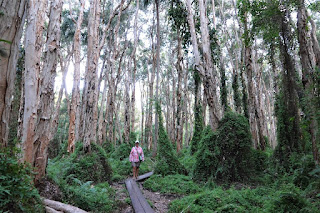 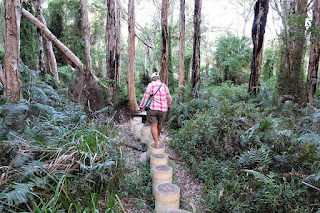 Our next target location was a scout campground near Bundaberg. We were feeling fatigued, having spent the last four days with a primary focus on driving and rushing about to view as much scenery as we could. We were due for some rest time and the laid-back atmosphere of the scout camp suited our needs. There was some walking trails and bird life to view. 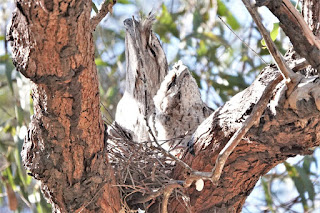 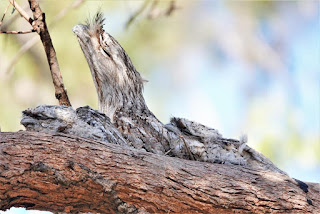 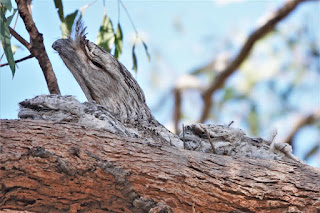 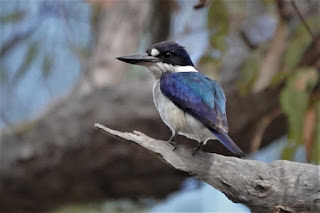 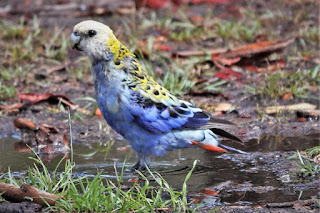 Our primary reason for being in this part of Australia was due to some maintenance needs for our caravan. A prior appointment early in the year had to be cancelled due to the outbreak of the covid-19 pandemic. Then a second appointment was cancelled with the escalation of covid-19 restrictions. We were within a few days of our current appointment time and our thoughts were focused on these needs. We cleared some of our caravan internal cupboards for the workers ease of access, in readiness for the maintenance work to be carried out by the manufacturer.

Ian and Kathy whom we had met at Notch Point back up the road a bit had offered us accommodation at their home while our caravan was receiving its manicure. This was a much-appreciated offer, transpiring with us staying at their home for three nights. It was another highlight for the year where we were thoroughly looked after, with beautiful accommodation, good conversation, shown around their neighbourhood, participating in some delightful walks and the glorious food. 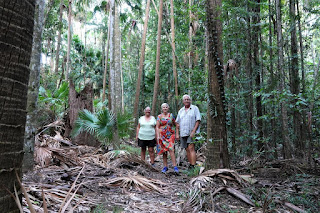 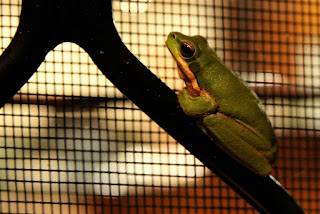 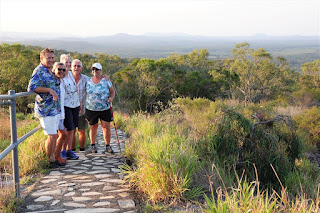 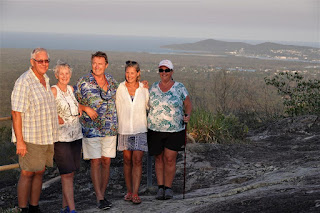 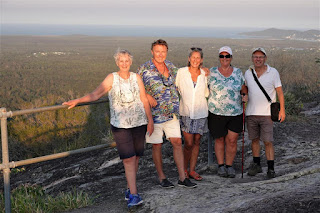 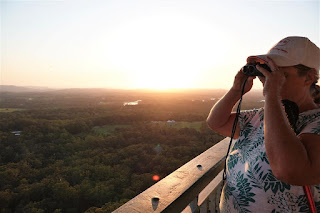 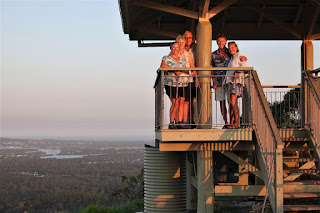 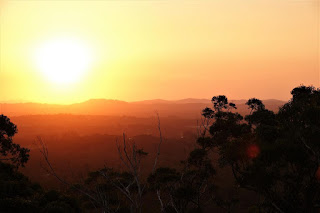 With the collection of our caravan after completion of repairs, we travelled about 50 kilometres down the road, setting camp in the showgrounds of Beerwah where we repacked our cupboards and tested out all of our repairs before progressing any further away from the manufacturer. 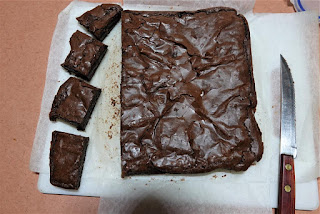 Posted by Travelling Past Time at 08:40 No comments: